Michiel van der Meulen was released into the world in 1969, from school in 1988 (… with a diploma and his wife to be), by the army in 1989 (… with a truck driver’s license and skills he fortunately never needed to rely on), and from university in 1999 (… with two more diplomas and skills he has relied on ever since). He works as a geologist at the Geological Survey of the Netherlands and is married with two children.

Other than his loved ones, the great passions in Michiel’s life are geology and music. While he wouldn’t be able to tell you which of the two is more dear to him, the Dutch tax office will have a clear preference. It’s geology that pays the bills and allows him to make the music that he loves, in the way he loves to.

The music Michiel loves most comes from a vast geographical area that stretches from the Uygur region in Western China all the way to the Maghreb in North Africa, and extends well into the Balkan and Iberian peninsulas. The area is home to fascinating, kindred folk and art music traditions that are underpinned by a set of related modal systems: the Turkish makam, Byzantine Echos, Arabic Maqām, Azeri Muğam, Persian Dastgāh, Turkmen Maqâm, the Uzbek and Tadjik Maqôm and Uyghur Muqam. Within that ocean of beautiful music, Michiel’s main interests are in Ottoman art music and folk music from the Balkans and Anatolia.

As long as he can remember Michiel has been hearing Balkan music played by his father Albert on the accordion, the why

being a matter of family history. Music in general has always been important to the Van der Meulen family, and after the customary treble recorder lessons—the very substratum of Dutch music education—Michiel was presented with the choice to continue with either violin or clarinet. These were the favourite instruments of his mother, which she thought would go well together with her husband’s accordion. He chose violin and she was right. Their playing eventually became so tight that Michiel at some point realised that he was playing the accordion on his violin.

Music cannot exist in scores alone and is not going to play itself. Composing a piece you care for creates the obligation to get it out there.

In 2011, Michiel started studying modal composition with Ross Daly at Labyrinth Musical Workshop in Crete. This helped him find his musical voice and deepen his relationship with music he loved since he was born, but was not born into. Contemporary Modal Music, which Daly defined as a genre, invites practitioners to draw from various modal traditions, respectfully, without infringement or appropriation, offering the wealth of ancient traditions on the one hand and the freedom to deviate from them on the other. Ever since he started out at Labyrinth, Michiel has enjoyed the great privilege to not only learn from but also work with musicians he really admires. He considers himself a happy man and hopes this shines through in his music. 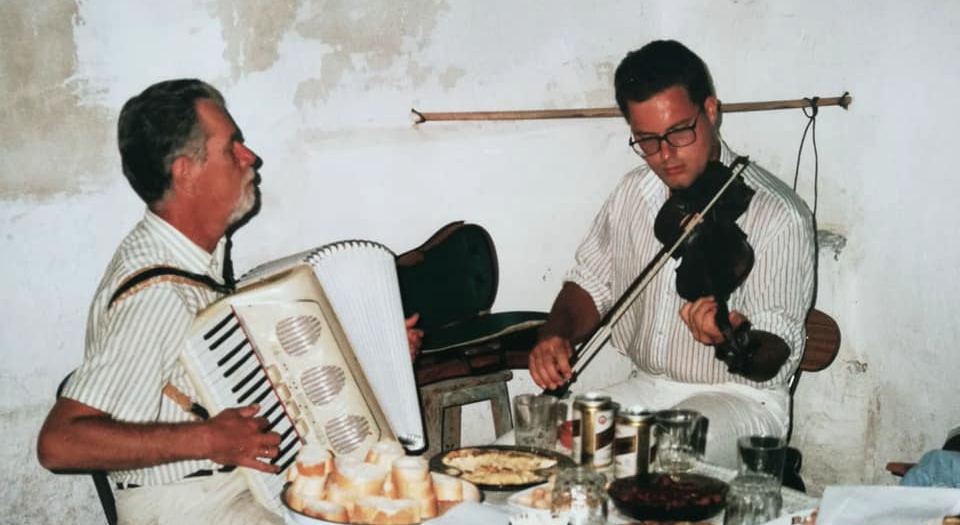 These are some of the people that Michiel interacts with in modal music, that is, recorded with, learned from, or simply likes very much. Check their websites or find their music online – you’ll enjoy it.

It is hard to underestimate the role Čalgija and the ensemble’s musical director Wouter Swets (1930–2016) played in building a Dutch audience for ‘world music’, in particular music from the Balkans and Anatolia.

Wouter Swets has been called the Dutch Alan Lomax but perhaps it is more accurate to think of him as the Dutch Ross Daly. It was him who drew Michiel’s father Albert to Balkan music, the closest match in Europe to the sounds of an early youth spent in the Dutch East Indies. It provided him a way out of the rather dire musical environment he had found himself in after moving to the Netherlands. Čalgija, in its 1960s line-up, was Albert’s first ensemble. Michiel has played and still plays with former Čalgija members. So it is fair to say that was Swets shaped, albeit mostly indirectly, Michiel’s initial musical preferences.

Čalgija existed, in different line-ups, from the early 1960s till 1995, and was then renamed Al Farabi, which existed till the mid-2000s. Swets was primarily active as a musician, arranger, researcher and educator; his discography is comparitatively modest. Čalgija produced an untitled EP in the mid-1960s, which

Michiel found out that there was unreleased studio material from 1981 en 1984/85 and decided, out of curiosity and respect, to find and release it. This eventually added two additional full albums to Čalgija’s musical legacy: Unforgotten and Üçayak.