Kairos Collective’s acclaimed third album is dedicated to the source of music. Music originates from its composer’s mind. But how did it get there in the first place? Why does it come out the way it does? How does one decide that a piece is finished? Why does it sometimes feel like pieces are writing themselves?

Read all about the album, tracks, and sources of inspiration.

Acknowledgements
Many thanks are due to: Ross Daly and Labyrinth Musical Workshop for guidance and inspiration • The musicians and studio staff for the great time we spent and the great job they did • Evgenios Voulgaris for inspiring the arrangement of Romanza and his advice on the essence of a big sound • Sergios Voulgaris for advice on devr-i kebîr rhythmic patterns for bendir • Cengiz Arslanpay for explaining metaphors in Ottoman poetry • Pavlos Spyropoulos for lending us his double bass • Remco Busink for modifying our tambura • Sven van der Gijp for extending Kairos Collective to the Netherlands • The Theocharopoulou-Orfanidis and Papaioannou families for hospitality during the Greek recording sessions and friendship in general • My family and inlaws for their generous support of the project • Dominy Clements for proofreading the liner notes • Martine van der Meulen for love and understanding – this album is, as always and more than ever, for you.

Erato was selected as the second Hollandse Nieuwe! of 2023, that is, featured for a week on NPO Klassiek in the programs Passaggio Late Night (weekdays) and Vrije Geluiden (weekend) with two tracks per day combined fragments of an interview (in Dutch). 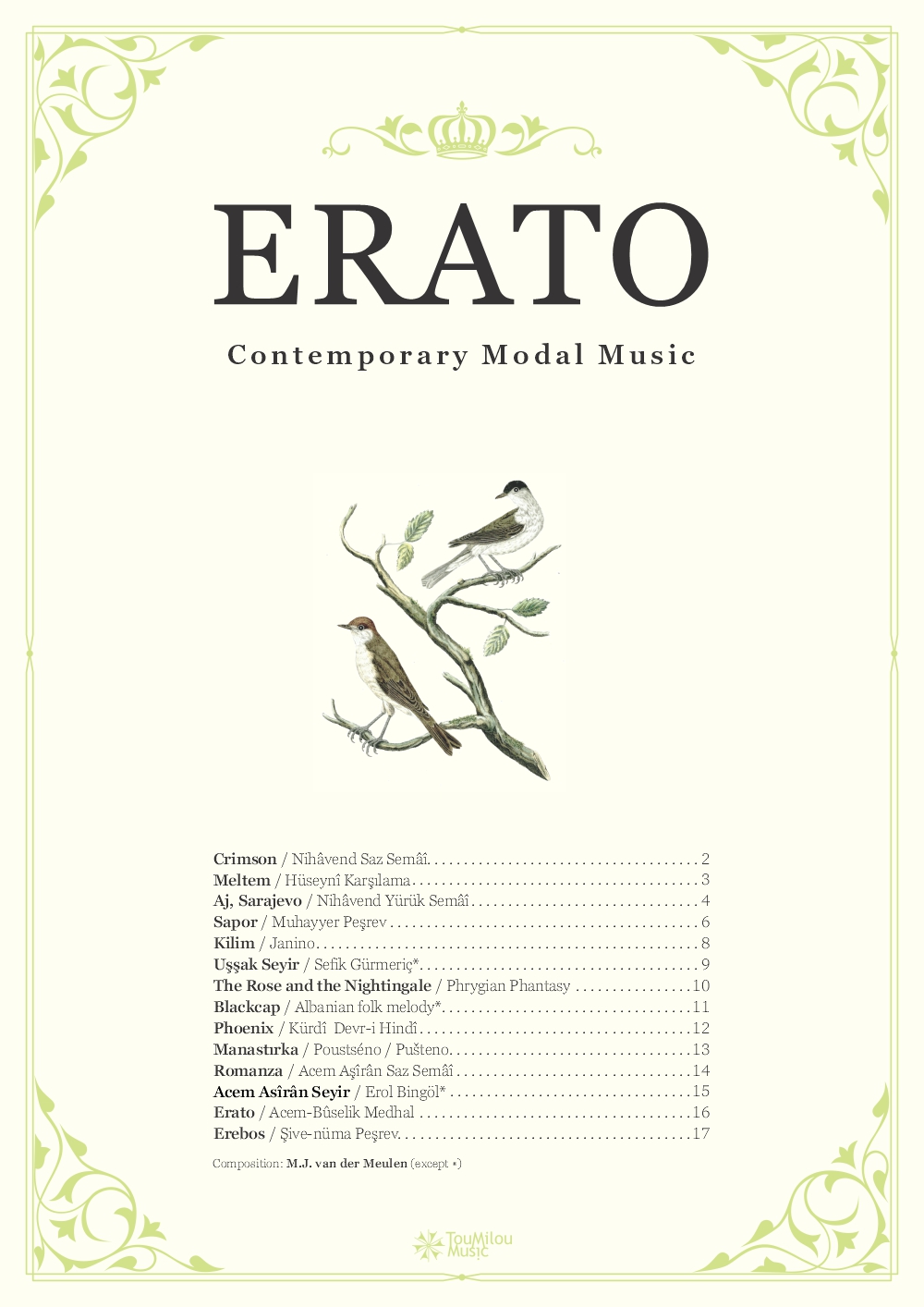 About the album artwork
Sir Edward John Poynter (Paris, 20 March 1836 – London, 26 July 1919), was an English painter and draughtsman with a long and distinguished career that earned him a knighthood and an honorary Cambridge degree in 1898, and a baronetcy in 1902. His ‘Erato, Muse of Poetry’ (1870, watercolour on paper, 47 x 33 cm) is more chaste and delicate than the generally voluptuous, exalted, Baroque to Romantic-era depictions. Apart from the fact that she is winged, Poynter’s Erato is a mythologically faithfull represention of the muse of love poetry, which I chose because of the beauty of the eyes. The artwork of the scores book is from Nederlandsche Vogelen (‘Dutch Birds’) by Cornelis Nozeman and Christiaan Sepp, the monumental, beautifully illustrated, five-part first Dutch avifauna, which appeared between 1770 and 1829.