< Back to album overview page <

Wouter Swets (1930–2016) was a well-known and notable Dutch ethnomusicologist, musician, composer, teacher and writer. Through lectures, workshops, radio programs, scholarly articles, polemics, CD reviews, and performances with his orchestras Čalgija and Al-Farabi, Swets inspired countless music lovers and musicians to share his passion for the musical traditions of the Balkans, Anatolia, Arabia and Central Asia, his understanding of which was rooted in the massive collection of beautiful melodies he collected over his life. Even though he would have argued that ‘world music’ does not actually exist as a genre, he has often been called its godfather in the Netherlands. These are the only recordings of Čalgija’s first line-up, originally issued on EP (7″ 33⅓ RPM vinyl). As far as we know, they might be the first Dutch world music recordings altogether, at least in this particular genre.

The album is very charming, a typical product of the 1960s, that is, of young people exploring music they found infinitely more interesting and exciting than the rather dire music that was popular in the Netherlands at that time. But while the emerging Dutch pop scene took its inspiration from the west, Čalgija looked east. The EP is basically a compilation of rehearsal room recordings, taped between 1964 and 1966, with the same recorder Swets used for ethnomusicological fieldwork. At that time, Swets’ band members were still students. In 1967, they left Čalgija in order to be able to focus on their graduation and then have careers, to the great dismay of Swets, who founded a new Čalgija ensemble that existed from 1969 to 1995 and acquired international fame. 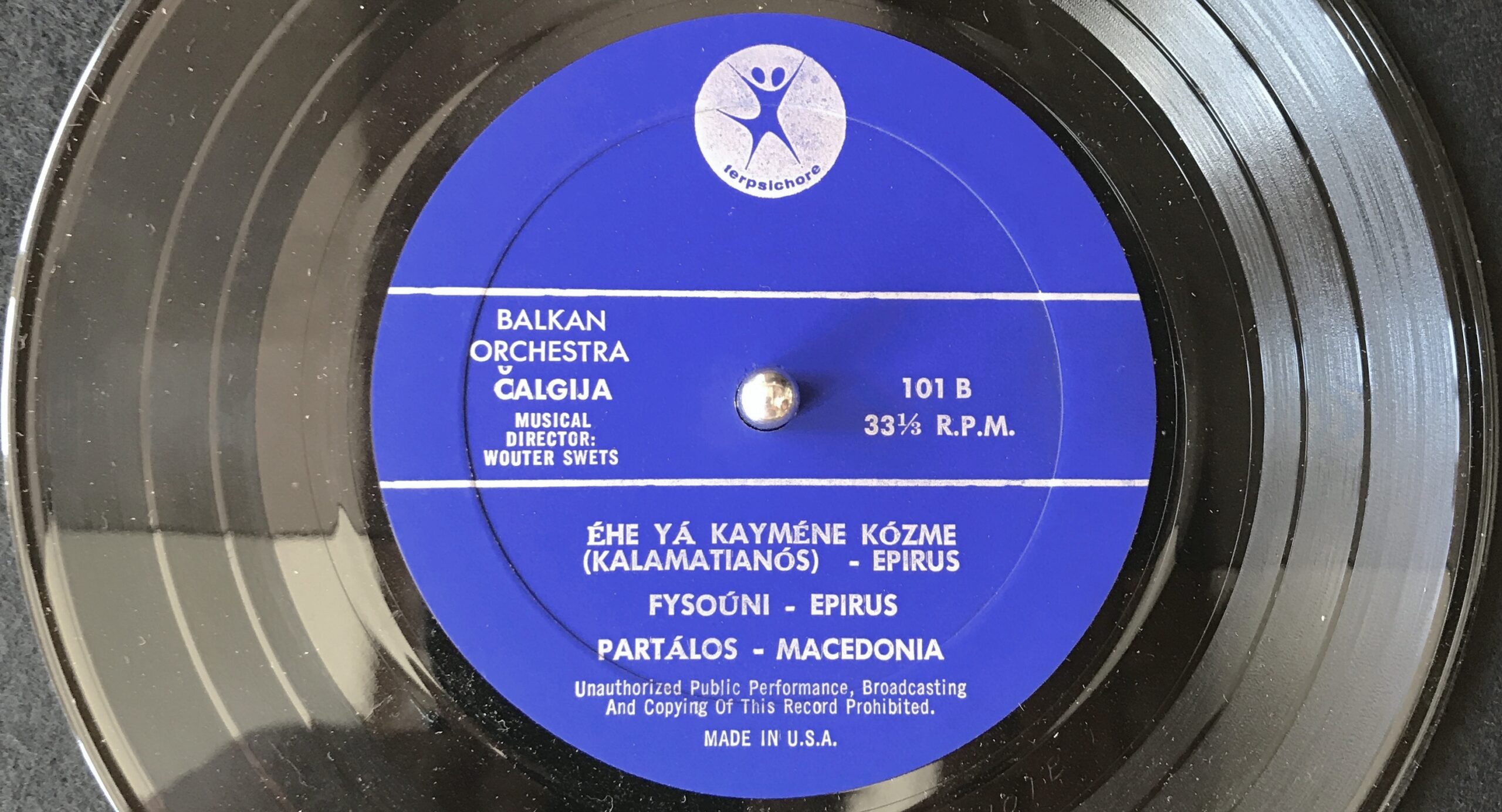 Tracks [2], [4], [5] and [6] are basically conscientious interpretations of melodies from mainland Greece, albeit within limitations presented by the instrumentation (accordions are not Greek traditional instruments). Track [1] and [3] are discussed in some detail, because they represent the incipient stages of band leader Wouter Swets’ hallmark approaches in ethnomusicology and as a musician.

Dance song from what is now Greek Macedonia in a 7/8 meter (SQQ); Kostur (Костур) is the Slavic name for Kastoriá (Greek: Καστοριά). In recordings from the Republic of Macedonia or the predecessor constituent Yugoslavian socialist republic, the melody is often played in a major scale and sung in parallel thirds. Sometimes, the second voice is even used as a solo first, discarding the basic melody. The result is a cheerful sweetness that contrasts somewhat with the lyrics (see below) and would, no doubt, have been eloquently but firmly disapproved by Wouter Swets.

Swets’ arrangement has two elements that were to become typical of his later work. The first is the restoration of a melody to what he considered the, or at least a possible original version, either using the most authentic and/or oldest recordings he could lay his hands on, or by making a reconstruction entirely by himself, guided by scientific principles and his own sense of aesthetics. Here, he discarded the modern use of parallel intervals and (much of) the harmonisation this brings, and used a traditional, more primitive melody + drone polyphony that is still commonly used in the Balkans, and which better suits the modal roots of the music.

The second element is represented by the giriş taksimi (Turkish: introductory ametric improvisation), played by Swets on the accordion in his very distinctive phrasing style (0:04–0:36). The mode of Čalgija’s version of the Kosturkso Oro, with a minor second degree and the fifth being the dominant, is Phrygian. Instead of simply using the same intervallic structure for his improvisation, Swets drew from makam, the Ottoman / Turkish modal system, albeit with the limitations of his tempered instrument that cannot produce the required microtonal intervals. He starts off in makam Kürdî, which is the closest match to phrygian in this modal system, but emphasises the fourth degree. So in order to be able to emphasise the fifth, he modulates back and forth to a tempered approximation of makam Hüseynî (upper register, 0:18). For flavour, he adds a hint of makam Karcığar (a common modulation of Hüseynî; 0:25) and makes his conclusion in makam Nev-Eser (which is actually not very common; 0:30). Later in his career, Swets would systematically assess the modality of Balkan melodies, particularly in terms of the makam system. In order to be able to produce microtonal intervals, he started playing kanun in the 1970s and a specially programmed synthesizer in the 1980s.

She sings girls’ songs
She dances girls’ dances
She gets engaged, turns black²
Gets married, is buried

And what are the little children?
They are little chains
And what is the colorful bouquet?
It is her first love 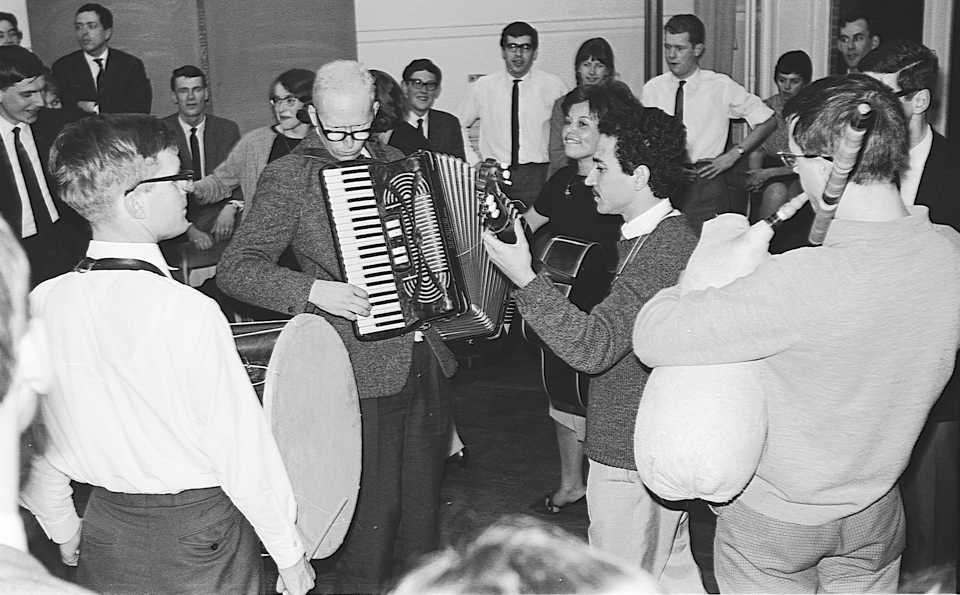 Well-known dance melody from Mani, the central peninsula of three protruding from the Southern Peloponnese into the Mediterranean sea. The meter is 7/8 (SQQ, kalamatianós).

Song to a tap’nos (ταπ’νός or ταπεινός) dance from Western Thrace, i.e., the Greek part of a region shared with Bulgaria and Turkey (Northern and Eastern Thrace, respectively). The meter is 4/4. It is typically sung by the dancers accompanied by drums, and if melody instruments are used, they will traditionally be gaida (bagpipes) or lyra (fiddle). In either case there is no harmonisation except for a drone. Swets’ arrangement of the dance reveals that, even though he was very much interested in the modal roots of Balkan music, he liked to indulge in harmonisation too: he was, after all, trained as an organ player. This might explain why he couldn’t resist using the Emin7 chords heard in the first two bars and throughout. The chord progressions starting at 0:38 seems to be inspired by Northern Thracian music, which can be, like a lot of Bulgarian music, lushly harmonised. He would later explore the harmonisation of modal music in more depth, with unexpected, sophisticated and very characteristic results.

Kalamatianós (7/8) dance from Epirus, a.k.a. Chorós tou Zalóngou (Χορός του Ζαλόγγου, ‘Dance of the Zalongos’). The title refers to a song that was reportedly sung by sixty three women from the town of Souli while dancing and throwing their children and then themselves into the gorge of mountain Zalongos in 1803, dying rather than falling into the hands of the Ottoman troups that had just overrun their semi-autonomous home region.

Well-known dance from Epirus in 9/8 (QQQS, karsilamás). In comparison with most Epirotic dances, Fysoúni is fast and upbeat.

Macedonian men’s dance from the area of Thessaloniki in 6/4, having a six-step pattern of leaps and squats. 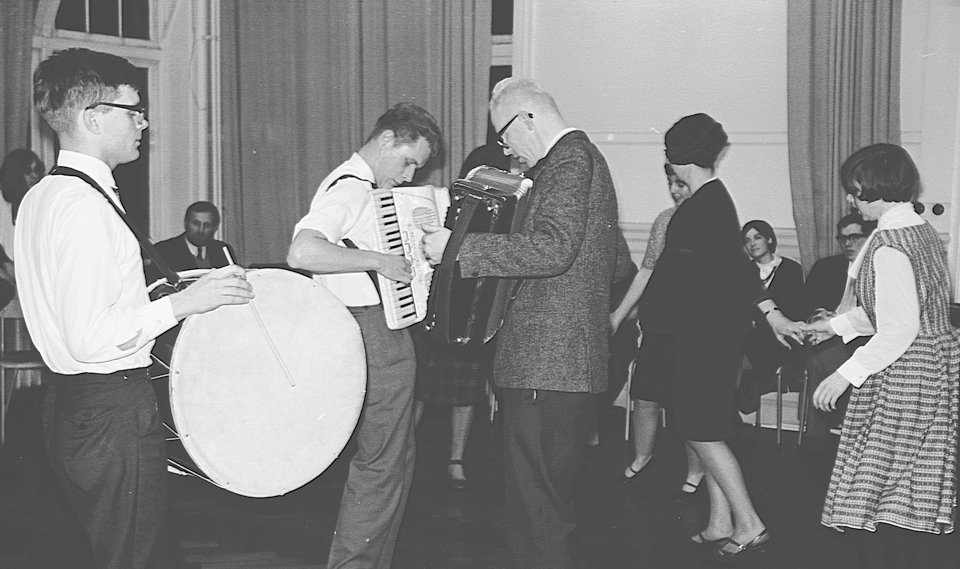